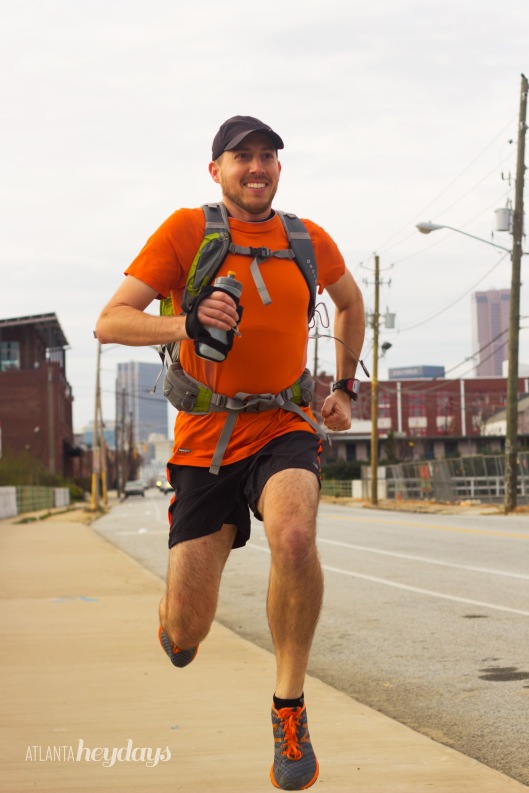 Socks. Josh Woiderski recommends always having a pair of extra socks at your office. That’s the one thing that’s usually forgotten when packing for a long trip or in Josh’s case … a trip to work. Josh is a run commuter. He runs approximately five miles every morning (then again every evening) from his home in Kirkwood to his job downtown at the Department of Justice. The commute takes him about 40 minutes.

“It’s a lot of fun,” said Josh, a Michigan native who has lived in Atlanta since 2004. “Being able to get to work without having to rely on an automobile or public transportation gives you a sense of accomplishment. At first, that’s the mental hurdle to overcome, knowing that you can do it. For me, it’s a way to exercise daily without sacrificing family time. And, running is the best way to explore Atlanta. You can stop and check things out, have conversations with people and stumble upon interesting things.”

Josh, who has two young sons, started running regularly while he was in the Army. Previously, a bike commuter, Josh saw run commuting as an opportunity to get a great cardio workout doing something he was going to do every day anyway — commute. “For awhile, my co-workers did think I was weird for doing this, but now they are used to it,” said Josh.

So how does the practical part of run commuting work? Josh irons and folds his clothes and packs them in the backpack he runs with. He recommends leaving shoes and belts at the office for less weight to carry. Once arriving at his office, Josh changes clothes and washes off (using a combination of soap, water and baby wipes) and starts his work day.

Josh estimates that there are around a dozen run commuters in Atlanta — people who might use some form of transportation (car, bike, MARTA, etc.) but make running a part of their way to get to work each day. Washington D.C., with it’s flat landscape and great public transportation, is the nation’s top city for run commuting. In Atlanta, Josh is working to help others figure out how to run commute effectively and easily. He started The Run Commuter blog, where 10 contributors from across North America offer tips, advice and stories. For example, listing the best waterproof backpacks and reminding people to pack socks.

Check out Josh’s The Run Commuter blog for tips and ideas on run commuting.