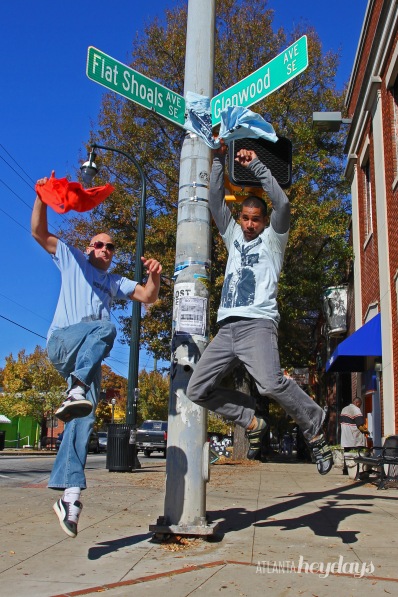 The smell of t-shirts burning in the oven reminds Jesse Vogel and Jordan Shorthouse of their first attempt at silk screening. On a Saturday afternoon three years ago, the two friends and co-workers spent four hours in Jesse’s kitchen printing their design on 12 t-shirts. It was a slow beginning, but it was definitely the start of something.

Jesse and Jordan, founders of Rep Your Hood, worked together at Turner Broadcasting for several years before going into business together. Although they are assigned to different departments, through their work on graphics for Turner Sports they find themselves collaborating on projects almost every day.

In 2010, when Jesse got a silk screening kit and started brainstorming ideas for t-shirts, he ran the idea by Jordan. Jordan took Jesse’s photos of Atlanta street corners and created Rep Your Hood’s large design. Or, as Jesse says, “Jordan took my idea and made it dope.” Rep Your Hood’s first shirt featured a street corner in East Atlanta Village – Jesse’s neighborhood at the time. And, at the 2011 East Atlanta Strut, Rep Your Hood sold 50 of their newly designed shirts.

“It’s because of the East Atlanta neighborhood that we got started,” said Jesse, a native of Boston, who moved to Atlanta in 1997. “There is so much pride in this community. Even though I don’t live here anymore, this is still my favorite part of town. I even wrote a song for my brass band about East Atlanta – ‘Flat Shoals Rider.’”

Rep Your Hood now sells 12 designs, representing 10 Atlanta neighborhoods. Grant Park, where Jordan grew up and currently lives, is featured on two designs – one with Zoo Atlanta’s most famous resident, Willie B. At local festivals where they set up Rep Your Hood tents, Jesse and Jordan enjoy talking to fellow Atlantans who often start reminiscing about the Atlanta neighborhoods they love and have lived in.

“The minute this starts feeling like work, we won’t do it anymore,” said Jordan. “But I love working with Jesse, love doing this every day and it’s great to be able to meet people who are excited about the neighborhoods where they live.”

Rep Your Hood features t-shirts and prints of Atlanta neighborhoods. You can purchase online through the company’s website or look for their tent at local Atlanta festivals.