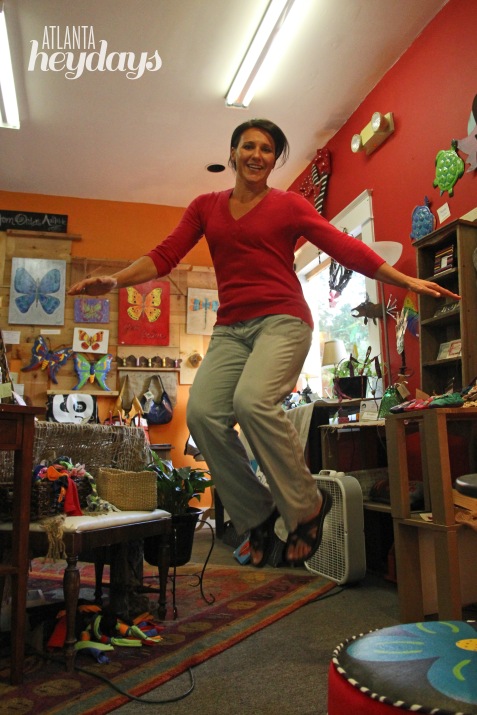 Brooke Schultz tells the story of Re-Inspiration at least three times a week. The people who enter her shop on Highland Avenue often ask her about the store’s recycled gift items – where they came from, who made them, how they came up with the idea. It was in telling these stories over and over again that Brooke first realized the store’s true purpose and niche.

Brooke opened Re-Inspiration in 2009 on Atlanta’s westside as a sort of alternative to “paint your own pottery” shops. She jokingly called it “paint your own old stuff.” But as she found herself repeatedly telling the stories of the items that filled her store and told her own story, she realized her customers were drawn to these repurposed objects. Now, the store is full of unique gifts, all which have been recycled in some way. There is the jewelry made from soda can tabs, pitchers crafted from glass bottles, wallets sewn from airline seat covers, frames cut from vinyl records, various items accented with bullet casings (these Brooke does herself) and lots more.

A native of Bay St. Louis, Miss., repurposing items was something Brooke learned at an early age. Her mother, who ran a wild bird store, recycled household items long before it became the cool thing to do. Brooke remembers the compost pot in the kitchen and the line of homemade recycling bins in the garage. Anything that could be recycled was recycled.

As an adult, the habits of childhood continued. Brooke remodeled the spaces she lived in, repainted furniture for friends and figured out how to breathe new life into old, sentimental items. When she was laid off as a drug rep, Brooke just did what she had always done – she repurposed. This time the object was her career and the end result – doing what she loves as a small business owner.

Re-Inspiration is located in the Poncey Highlands. Stop by the store Oct. 7 during Atlanta Streets Alive as Re-Inspiration spills into the parking lot and street with an artists’ market.

This entry was posted on October 4, 2012 by Atlanta Heydays. It was filed under Atlantans and was tagged with Atlanta, Atlanta gift store, Brooke Schultz, Poncey-Highlands, Re-inspiration, recycled gifts, repurposed gifts, reuse.